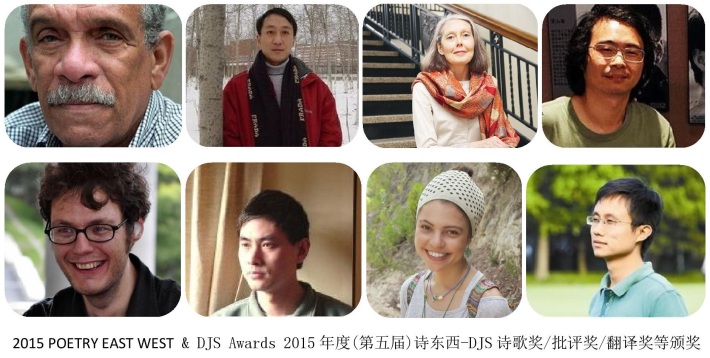 Poetry East West (PEW), a Chinese-English literary journal in Beijing, and DJS BOOKS, a Chinese imprint of Red Hen Press in Los Angeles, together present the 2015 awards to the following eight extraordinary poets, in six categories:

Derek Walcott’s enormous body of literature has not only expanded our understanding of “English Literature” but also enriched our view of World Literature by bringing awareness of the Caribbean Sea, a territory that used to be unfamiliar to most of us. His historical perspective, sense of humor, strong lyricism and visual language have inspired younger generations of poets all over the world including countries such as China where he has not set his foot in physically. His volumes of poetry and drama have been the subject of lifelong study. His translation of Joseph Brodsky’s poems sets a model for the aspiring poet-translators in China.  His insight and eloquence as reflected in his essays on the fragmented nature of cultural identities and loss of native culture in the colonial and post-colonial Caribbean has helped us realize the responsibility of poets to take an active role in debates of social and cultural issues. Unburdened by the usual anxiety of the post-colonial age or that of the migrant writers, Walcott writes with a confidence supported by his inexhaustible creativity and talent. His new collection of poetry (after White Egrets) will enlighten our understanding of poetry and how it interacts with other modes of art. His work has been and will continue to be an enduring well of inspiration for us from which we can draw energy and courage to strengthen our own work.

Jing Wendong (1968-) is a well-known poetry critic in China whose poetic talent has often been overshadowed by his influential critical writings. As a critic, his thorough investigation into the poetry texts in context of literary changes has re-defined new generations of poets in China and revealed the core issues in the discussion of various aspects of the current poetry in China. As a poet, he resists easy categorization.  Rather than subscribing to current or past trends or fashions, he pursues his own unique response to inspiration. Rich in lively tone, fresh vocabulary and a deep insight into life, his poetry commands the attention of the reader and his unusual view of the world helps us look at our surroundings in more retrospection.

Anne Carson was first translated into Chinese by one of the PEW editors, but this award is being given for her original work in English. Original here is being used for double effect, not only with respect to the original texts in English, but also in recognition for her originality as demonstrated throughout her work.  As one of the bravest writers since Emily Dickinson, Walt Whitman and one of the pioneer writers to break the boundaries of genres and to blend classical elements with contemporary writing, Anne Carson has dazzled us with her brilliant poetry under non-poetry labels. Her genre-fusion is especially charming and inspiring, liberating us further from free verse to free forms and to freer thinking and imagining. Although sometimes controversial, she has been the most exciting writer known to Chinese poets. Her distinctive irony and subtle criticism of the contemporary society in the disguise of an ancient character or a “husband” is encouraging and challenging at the same time. Her unique language and seemingly unpoetic long lines have stirred our minds and lit the way for our imaginations down winding paths in the unknown worlds.

Poet Xi Du has devoted half of his energy to poetry criticism.  As one of the best poets in contemporary China, his critical essays in the 1990s uncovered some of the most overlooked poets at that time, revealing their poetic talents to a wider readership through his critical introductions. Many of the poets he identified and wrote about have since become the corner stones of the 21st century poetry scene in China. In recent years he has focused on the study of Hai Zi and Luo Yihe, two poets who died in 1989, with a particular attention to the latter whose work has been overshadowed by various factors including the suicide of the former. Xi Du’s research work and uncovering of Luo Yihe’s poetics and legacy in poetry criticism has provided fundamental reference for the study of contemporary Chinese poetry and for the reconstruction of contemporary poetics and further understanding of literary imagination of the post-misty generation.

As the poetry editor with Words Without Borders, Ilya Kaminsky edited Ecco Anthology of International Poetry (HarperCollins, 2010) (with Susan Harris) which “collects an amazing spectrum of poetic voices from around the world…  It becomes immediately indispensable.” (John Ashbery). He is also the founder and editor of the Poetry Foundation Monroe Institute’s book series of “Poets in the World” and podcast series of “International Poets in Conversation”. Among his other achievements in editing are Gossip and Metaphysics: Modernist Russian Poems and Prose (Tupelo), A God in the House: Poets Talk about Faith (Tupelo), and Homage to Paul Celan (Marick).  He is also the editor in chief and poetry editor of the annual publication Poetry International – incredibly rich collections of the world’s finest poetry and the most innovative work. No other poet of the younger generation has done as much as Ilya Kaminsly in promoting poetry from around the world, especially with regard to less represented regions and less translated poets.

Ajiu (Xuantian Li) is a Chinese poet and translator living in Canada. His has been translating and promoting English poetry in China for more than ten years. His translation reflects a deep knowledge of the poems in the original culture and his own sensitivity to languages as a poet of Chinese. His translation of the poetry by Larkin, Walcott, and Canadian poets are among the best literature of translation and also of the best quality in translation in China today.

Yulia Dreyzis (1986- ) is a poet and sinologist in Russia. While teaching Chinese literature at Moscow State University, she has been translating and introducing some of the most interesting Chinese posts from different schools and trends on her website of Versevagrant in Russian. She has also translated Yu Hua’s novel Brothers which has just been published in 2015. While participating in the International Translation Workshop at Beijing Normal University, she expressed her opinions on Russian and Chinese poetry with first-hand knowledge and shard her ideas on how to improve mutual understanding through poetry translation and dialogues. Her translation demonstrates her profound awareness of the various mechanisms of contemporary poetry writing.  Her efforts will enhance the Chinese-Russian exchanges in the new age after the abrupt halt in the 1950s.

Qing Sanshu (1991-), currently a graduate student at Fudan University in Shanghai, is one of the few young poets in contemporary China that combines their ambitions in poetry writing, translation, critics in their daily practice. He has translated poetry from English and French into Chinese. As a poetry critic, he has been actively involved in debate of contemporary issues. In his poetry writing he is consciously bridging ancient tradition and newest language, blending the classical syntax with modern rhythm, and rediscovering the ancient rhetoric.

Additional citations and remarks can be found in the Chinese version of the announcement: http://www.poemlife.com/newshow-9672.htm

The PEW-DJS Award committee will contact each of the eight winners of 2015 by email regarding the cash rewards for this year. Compared to the million dollar awards worldwide, this is a small award but it’s founded by poets and presented by poets in recognition of poets. (For those whose current email is unknown to us, please contact us at: poetryeastwest@gmail.com

What’s special about the 2015 awards?  PEW has invited 31 poets (mostly Chinese) to serve as special judges for this year in considering a pool of 66 poets, translators and critics from around the world. All of the eight winners are poets who deserve an award in poetry first of all but who have also done tremendously beautiful work in the other categories.  By giving the Poetry Award to critic Jing Wendong and the Criticism Award to poet Xi Du (who has taken a two-year leave from the journal to complete his PhD in literature), we are attempting to break the boundaries as they (the winners) have already done. And further more, by selecting what appears to be the most “traditional” and most “avant-garde” poets, we are trying to re-define “vanguard” and explore more possibilities of combining classical traditions and the most daring innovations and experiments in the forefront of contemporary poetry.

Poetry East West journal is founded by poets from China and diaspora poets in the US with contributing translators from many other countries, with inaugural issue published in 2010 and seven issues up to 2014 and additional three issues in the printing right now (hugely delayed due to busy schedules of the poet-editors.)  DJS BOOK started in 2008 in China and became an in print of Red Hen Press/USA in 2013 to promote poetry from China and has published five books authored by the DJS Book Award winners. Despite limited funding, we are expanding the scope of the awards each year to include more international poets in order to broaden our perspectives and horizons.

“East-West” means “thing” in Chinese.  We wish everyone many happy things in this winter season and throughout the next year.