An informal report on the 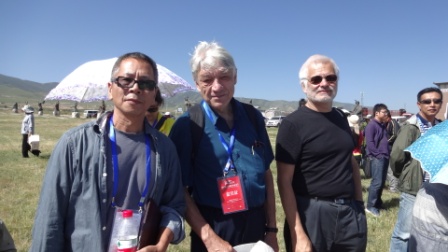 I didn’t plan to go this year but was invited when I was in the middle of the Chinese-Slovenian Poets Exchange and Translation Program in Beijing. While in Qinghai I ran into Chinese poet Lu De’an (my co-fellow for the Henry Luce Foundation Fellowship). He was surprised to see me too. In the above picture were Lu De’an, the German sinologist 顾彬 and Austrian poet 聂德乐. 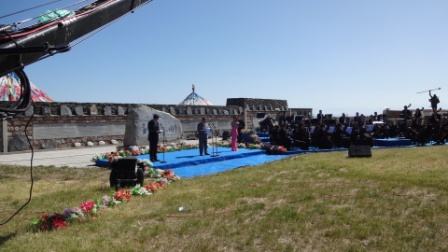 Like before, we got on the buses every morning to go to different locations of Qinghai. The best part of this festival was never the readings (lack of audience) but the traveling.

The first reading was by the Yellow River, opened by a Spanish poet accompanied by wonderful translation. The other readings in the following days didn’t have translations unfortunately, even on the same first night none of the Chinese poets had their poems translated. 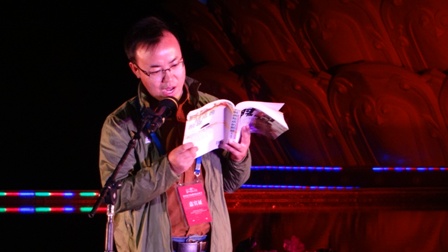 I was listening to most of the Chinese poets that night and felt sorry for them because the international poets had no idea what their poetry was like. Many poets did good reading such as Pan Xichen, Shen Haobo, Yang Senjun, Wang Xiping (above) and others.  German poet Steffen Popp was kind enough to ask people what was being read and got some instant translation as he was interested in what’s going on in Chinese contemporary poetry. We talked briefly in Berlin in June and briefly again in Qinghai. He is one of the young poets that I hope would be continuously interested in poetry in China and some sort of dialogue and exchange.

It was so good to see Fernando Rendon again in China. His Medellin International Poetry Festival in Columbia was one of the best things I ever experienced. There was reading everyday and lots of interaction among international poets and with the local poets. They promote their own poets too – that’s what I liked most. His reading in Qinghai on the night of the 10th was so moving, with Chinese translation beautifully rendered. I read his poetry before but it was different listening to him especially with Zhang Xinyi’s reading in Chinese translation after each long line.

Christopher Merrill from Iowa/USA was reading that night too. I look forward to reading his new poetry book forthcoming from Tupelo Press. I didn’t get a chance to read his Chinese translation if there was any. I raised some suggestions to the organizer about providing translations on projections in the future so that Chinese poets and international poets could at least know who was reading and what. Most of the time the Chinese poets were reading to each other (some didn’t even bother to listen)  and had no clue what most international poets were reading about unless accompanied by a translator which was not provided for everyone, strangely enough, especially this year when so many poetry translators attended the festival that it’s possible to pair each poet with a translator but it didn’t happen. Only a few Chinese had a chance to talk to the international poets. But it’s good for most of the Chinese poets to attend festivals like this. (photos and notes by MZ)